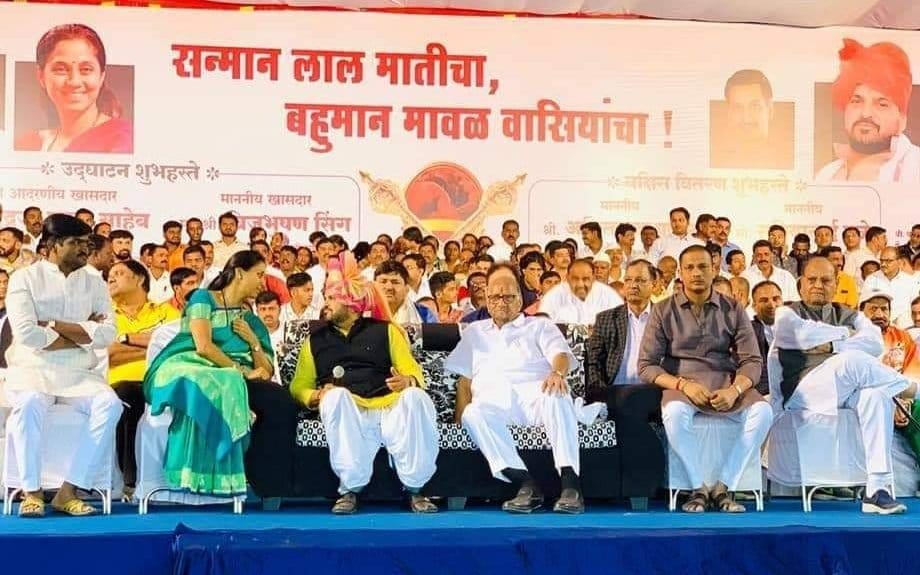 BJP MP Brij Bhushan as the head of the wrestling association and Sharad Pawar as the head of Maharashtra and other office bearers were present at a wrestling event held in Mavla three years ago. The event was organized by Mayur Kalate, a former corporator in Chinchwad Assembly constituency, who is always in the limelight in the political arena. The wrestling arena was filled before the Lok Sabha elections. After that, Kalate’s name came up in the discussion for Maval Lok Sabha candidature.

Meanwhile, MNS chief Raj Thackeray is currently the focus of discussion in the country’s politics due to the bhonga Ayodhya tour at places of worship. Some are now saying that Raj Thackeray’s visit to Ayodhya was not to help any political party as BJP MP Brij Bhushan came forward in opposition to Raj Thackeray . MP Brij Bhushan was also accused of indirectly aiding some bigwigs in Maharashtra.

MP Brij Bhushan and NCP’s Sarvesarva Sharad Pawar have a cordial relationship and MNS tweeted a photo of the event held in Maval taluka today, asking who is responsible for all this opposition to the tour. The relationship between Kusti-Balgada and Pimpri Chinchwad Maval is so old that efforts have been made to make it a political arena for the last several years. Mayur Kalate has a direct relationship with NCP supremo Sharad Pawar. Due to his contacts with big leaders in the state, Kalaten has dominated local politics.

What is the official role of NCP?

NCP spokesperson Mahesh Tapase has responded to this. He said, “I don’t know if it’s childish or childish. We have not made any statement about Raj Thackeray anywhere. In all the meetings, he made statements against Sharad Pawar. Maharashtra had high expectations from him. But if you look at the three speeches, the NCP was talking about what Sharad Pawar did without talking about you, the party, the role ”. That is also what the investigation has said.