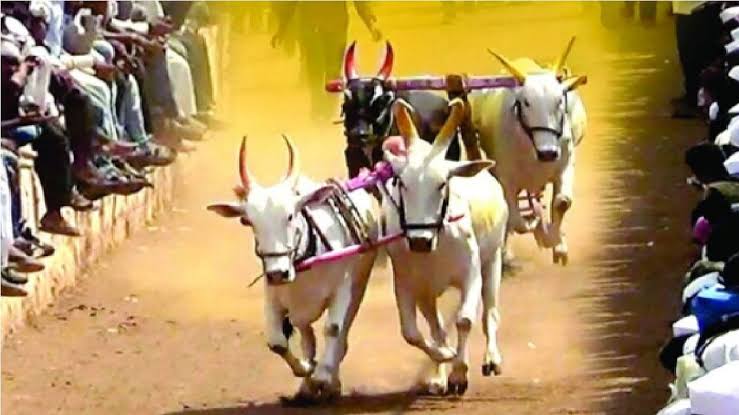 Bhosari: Pimpri Bhosari’s (Bhojapur) village deity Shri. Preparations for the bullock cart ghat are in full swing and bullock cart enthusiasts and cart owners from Panchkrushi are appealing to participate in the competition.

The village deity of Bhosari village, Shri. Bhairavnath Maharaj fills Urus every year on the occasion of Jatre. The festival has not been held in the last two years due to Kovid’s condition. However, due to the lifting of restrictions this year, the festivities went smoothly. The races will be held for the first time since the Supreme Court lifted the ban on bullock cart races. So the curiosity of the villagers has reached Shige. Wednesday, d. Thursday the 18th These competitions have been organized on 19th May at Balgada Ghat in Bhosari.

Gudi Padhva has a tradition of holding a meeting of the elders of the village in the temple. In this meeting year round planning is done for the development or management of the village. Utsav and bullock cart races are organized on the initiative of Bhairavnath Utsav Committee and all the villagers of Bhosari (Bhojapur). The cart owners in the city including Pune district also participate in Bhosari bullock cart races. This year, due to administrative hurdles, the bullock cart race was postponed due to changes in the scheduled time.

Meanwhile, the district administration and the municipal administration have responded positively to the permission for bullock cart races, with official permission expected in two days. In this regard, preparations for the Ghats are in full swing, said Ashok Landage, President, Pune District Bullock Cart Association.

The saying ‘Twelve villages, another village, Bhosari’ is famous in Panchkrushi. Bhosari has always been at the center of the political scene in Pimpri-Chinchwad. At the beginning of the political tug-of-war, Bhosarikar filled the non-political arena with a message of unity. The bullock cart race was then postponed. This was being discussed in political circles. However, Bhosarikar has organized a bullock cart race in unison, putting aside political differences and partisan politics. Preparations are underway for the races following the rules and regulations of the administration. For this, the construction of a ghat for the young congregations in the village is almost underway. It has been decided not to do any kind of politics in the village. Therefore, it is expected that bullock cart races will be held this year which will be ideal for the villages of Panchkrushi.