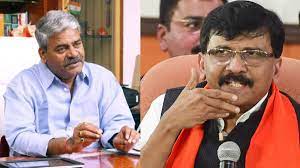 Shiv Sena’s ‘Firebrand’ leader Sanjay Raut has claimed that no matter how much one calculates, Shiv Sena will contest for the sixth seat of Rajya Sabha. Therefore, the hopes of the supporters of former MP Shivajirao Adhalrao Patil of Shirur Lok Sabha constituency have been dashed. It is being speculated that Adhalrao Patil will be the sixth MP. The reason is the same.

A few days back, Sanjay Raut had held a press conference in Pune. At that time, it was announced that Shivajirao Adhalrao Patil would be the next MP. This created a situation where a nationalist struggle would break out against Shiv Sena from the seat in Shirur. In this, Deputy Chief Minister Ajit Pawar jumped in and asked whether Sanjay Raut has the right to give a ticket. Such a question was presented.

Meanwhile, Sanjay Raut, who is at the forefront of the Shiv Sena’s decision-making process and has a reputation across Maharashtra as a troublemaker, is now rumored to be responding to Ajit Pawar’s verbal attack with action. In fact, there is convincing news that such disturbances are going on on ‘Matoshri’.

In the assembly elections held in 2019, Shiv Sena was expelled from Pune district. In the Lok Sabha elections, Supriya Sule’s candidature is certain in Baramati. There is no denying that young leader Partha Pawar will get a chance from Mavla. Now Dr. from Shirur constituency. It will not be possible for the NCP to cut Amol Kolhe’s ticket. The reason, Dr. Kolhe is the star campaigner of the NCP. Now, with the help of NCP, Shiv Sena will give ‘sixth’ MP from Shirur to settle the dispute in Shirur. Apart from this, efforts will be made to increase the strength of the party in the Assembly and Lok Sabha elections by reactivating strong leaders like Adhalrao Patil in the politics of Pune district, political observers have reported.

According to the changed equations in the state, two candidates from BJP and one each from Shivsena, NCP and Congress can be elected to Rajya Sabha. After the Shiv Sena claimed the sixth seat, Sambhaji Raje decided to contest the Rajya Sabha elections as an independent. Now that the BJP is all set to field a third candidate, the tide has turned for the sixth seat in the Rajya Sabha. Shiv Sena MP Sanjay Raut has made a big statement while getting the ropes for the sixth position. Shiv Sena will contest for the sixth seat, said Sanjay Raut. No matter how much one has to do arithmetic, both numbers and mode are at the forefront of development. Sanjay Uta has also expressed the belief that he will fight and win.

For 6th Rajya Sabha seat
Opponents are jealous of starting horse market in Maharashtra .. Money from corruption .. Horse market from that! When will this vicious cycle stop?
Shiv Sena will fight for the sixth seat.
No matter how many numbers one has to modify. Both numbers and modes are at the forefront of development. Will fight. Will win. pic.twitter.com/VOXRKRDzdk