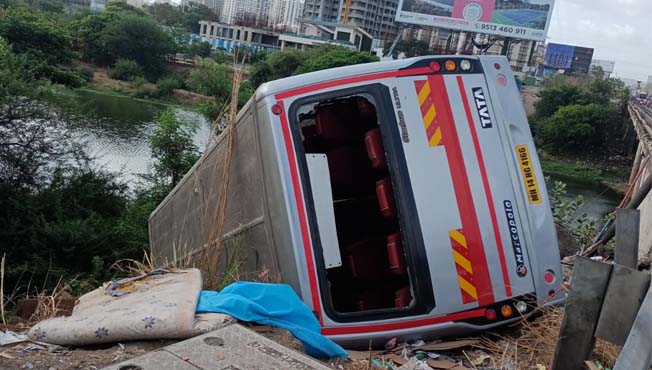 Pimpri: The private bus crashed into the flyover wall and crashed into a ditch near the river bed. The accident took place at Wakad on the Mumbai-Bangalore highway around 5 am on Monday (23). Fortunately, no casualties were reported.

According to police, the private bus was traveling on the Mumbai-Bangalore highway towards Satara. At Wakad, the driver lost control and the bus hit the flyover wall on the Mula river. As the speed of the bus was high, the bus went into the side pit and crashed.

Upon receiving the information, the police rushed to the spot and inspected it. At that time, there were no passengers in the bus. Police said the bus driver jumped on the spot. Meanwhile, the accident caused a traffic jam on the highway for several hours. Police removed the bus with the help of two cranes and smoothed traffic.