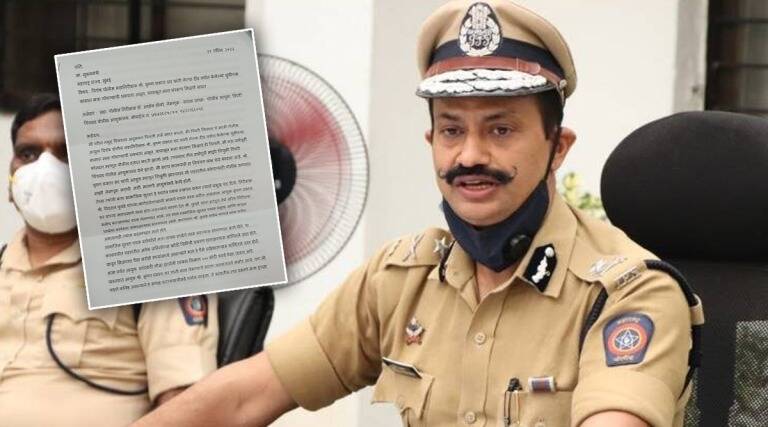 It is said that Assistant Inspector of Police Ashok Dongre wrote the letter. Dongre is named as the applicant. It is understood that Dongre claimed that he did not actually write the letter.

Meanwhile, “I am under a lot of pressure to say that I did not write the relevant letter. It may be threatening to change it, but I am adamant in my response, “the letter said.

What exactly is said in the letter written to the Chief Minister?

The letter, addressed to the applicant, Assistant Inspector of Police Ashok Dongre, said, “I am likely to be implicated in the wrongdoing committed by Special Inspector General of Police Krishna Prakash in the last one and a half years. I have been working in Pimpri-Chinchwad Commissionerate of Police for three years now. I was asked to deal with land acquisition cases in the city. He asked me to accept the crores of rupees coming from it. The amount collected (recovered) for Krishna Prakash till now is more than Rs. 200 crores. Over time, Krishna Prakash understood the reason for my appointment. But being a junior, he had no choice but to do everything. They would have to do such a thing when they did not want to. During this period many builders and some women had to do unwanted work. Four senior police inspectors had to decide how to pay the media. Some media representatives and journalists of reputed dailies were handcuffed to raise the image of the media in general. Each was given a fixed amount a month. Some social activists were used to uplift the image of Krishna Prakash. All of them have criminal backgrounds and there is a strong possibility that they could endanger my life after this letter.

Also, information about women was taken out from time to time by attending social events. It was noticed that some such women came in contact with the commissioner. Land deals are likely to be exposed by hand to the people’s representatives. So in the future, there may be an attempt to persuade me regarding the money that these people have shot. Phone recordings of every transaction so far, along with evidence of financial transactions. Four Assistant Commissioners were called to the Pimpri-Chinchwad Commissionerate after seeing the land issue and then sent to the Commissionerate. These four have an idea about all the transactions in the city. Senior inspectors were sidelined. The inspector who had canceled the transfer from Matt had forcibly written that he did not want to be appointed to the previous position. However, four police inspectors and an assistant police inspector were sitting in the Commissionerate and handling all the transactions. The money I have received so far has been reaching the place where the commissioner will tell me. I have never used any of this new money for my personal work. I have already tried to inform all this to the very senior officers of the police department in Mumbai. However, no positive response has been received from them. So today I am finally presenting my case to you. My family and I are scared and expect you to be safe. When the application reaches you, I am likely to be under a lot of pressure to say that I did not write it. It may be threatening to change it, but I am responsible for it, “the letter said.

What are the key allegations in the letter?

– Rs 3.5 crore was taken for non-arrest of the director while there was an order to arrest him in Seva Vikas Bank scam case.

– Rs 2.5 crore was taken for not arresting a bettor in Pimpri.

– A program was organized for political and social activists on the occasion of the Commissioner’s year. The program was funded by builders from Hinjewadi and Maval.

– Krishna Prakash asked a journalist to pay lakhs of rupees in the case of touch scandal related to NCP.