Supporters of Pimpri-Chinchwad Nationalist Congress Party’s ‘heavyweight’ leader and MLA Anna Bansode staged a show of strength on the occasion of his birthday. It has now been decided that Bansode will be the ‘Kingmaker’ in the politics of the city against the backdrop of the forthcoming municipal elections.

The OBC reservation Supreme Court on Wednesday directed the Election Commission to announce the election program. Therefore, MLA Bansode’s birthday was being celebrated in the city while the political movement was gaining momentum.

Bansode, the only NCP MLA in the city and a loyal ally of Deputy Chief Minister Ajit Pawar, is now active. A certain group in the party is trying to ‘corner’ Bansode in party politics. Behind this are the calculations for the 2024 elections in Pimpri Assembly constituency.

Meanwhile, MLA Bansode held a meeting in the last few days to discuss the pending development works in the constituency and follow up. From the slum dwellers along the railway tracks to the provision of houses to ordinary working families, Bansode tackled a variety of fundamental issues. Bansode’s ‘craze’ started growing in the city. That is why local office bearers of NCP swept the newly elected city president and attended the birthday party.

MLA Bansode’s Chiranjeev Siddharth Bansode took the initiative and decided to provide ambulance service to the poor citizens of the city. Accordingly, by donating six ambulances on the same day, he has signaled to carry on the social work of his father MLA Bansode. In particular, it is almost certain that Siddharth will contest the upcoming municipal elections. 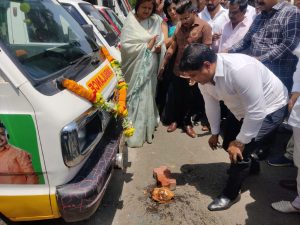 MLA Bansode’s close friend and Bharatiya Janata Party MLA from Chinchwad Assembly constituency Laxman Jagtap is currently in hospital. Although his condition was stable, Bansode decided to celebrate his birthday very simply without taking any big event this year. Therefore, in the political circles, there was talk of friendship between MLA Bansode and Jagtap beyond politics.

Though the NCP is leading the new generation in Pimpri-Chinchwad against the backdrop of the forthcoming municipal elections, it will give strength to NCP supremo Anna Bansode in terms of elections. In fact, that is the inevitability of the NCP. Because, at present, the NCP does not have a promising face that will bring about a decisive change in local politics by combining the old and the new. On the other hand, in Pimpri Assembly constituency, most of the NCP corporators will be elected. Deputy Chief Minister Ajit Pawar will take note of this fact and MLA Bansode has gained political power, observers say.