“Nagraj” incarnated in the Pandava-era Mahadev temple at Loni Kalbhor! 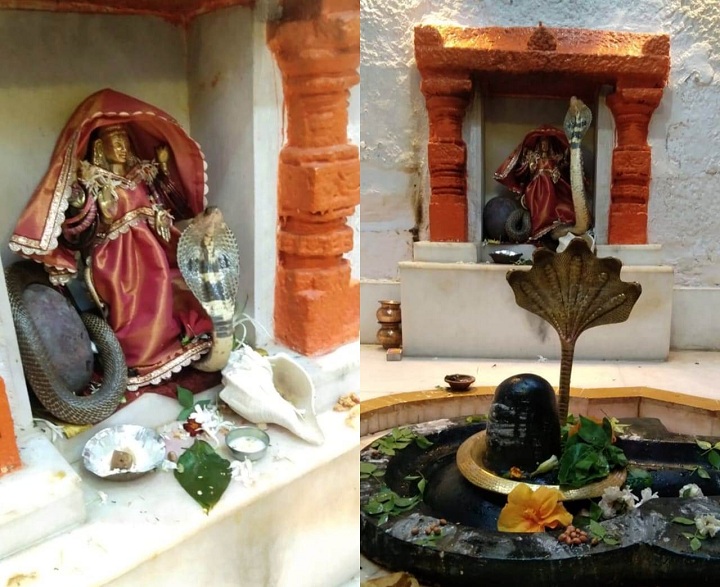 Butter Kalbhor (Pune): We may have seen the scene of Nagaraj sitting on the pindi of Mahadev many times in Hindi or Marathi movies, but hundreds of Shiva devotees of Loni Kalbhor got to see this sight in person. “Nagraj” suddenly appeared in the Pandava-era Mahadev temple at Loni Kalbhor on Friday afternoon, and he directly carried the pindi of Mahadev and gave darshan to hundreds of devotees who came to the temple.

We have been reading about the relationship between Lord Mahadev and Nagaraj in Hindi-Marathi movies as well as reading in many stories. A lot has been written about this in many stories. But so far only a few lakhs have been lucky enough to see it in person. The number of Shiva devotees from Loni Kalbhor has also been included in this. Suresh Parvatrao Kalbhor, the trustee of the Pandava-era Mahadev Temple at Loni Kalbhor, was the first to get that luck around two o’clock on Friday afternoon. He showed this matter to the devotees coming to the temple. After that, hundreds of devotees visited Nagaraja.

This temple at Loni Kalbhor is said to belong to the Pandava period. About 50 years ago, Mr. Suresh Parvatrao Kalbhor alias Maharaj did the work of diligently cleaning and transforming the area around this temple and bringing the temple to light. The temple area is spectacular due to the plantation of surrounding trees. The Shivlinga in this temple is of the Pandava period. At the door of the main hall of the temple, the idol of Lakshmi Narayana carved at that time, can be said to be a feature of this temple. Even the idol of Nandi, installed during the restoration, is carved entirely out of one stone. A fire is kept burning continuously in front of the temple. As Nagaraja gave darshan to the devotees in such an environment, the belief in Bhavikant Mandira increased further in Lonikalbhor area. It was seen that many people have made this video viral through their social media.

Giving more information about this, former deputy chairman of Haveli Panchayat Samiti, Sunny Kalbhor said, the temple of Lord Mahadev at Loni Kalbhor belongs to the Pandava period. Thousands of devotees visit this temple every day. Meanwhile yesterday (Friday) at around two o’clock in the afternoon, Nagaraja directly put a wheel on Mahadev’s pindi and gave Nagaraja’s darshan to the devotees. Nagaraj was sitting in the temple for an hour. He even approached temple trustee Suresh Kalbhor and his associates, and tried to give them darshan. After about an hour, the snake friends of the village caught Nagaraja and left him in a nearby tree. The above case has increased our faith even more.