Home English Municipal Commissioner’s ‘Dhakkatantra’: A basket of bananas for the demand of Maha Vikas Aghadi

Municipal Commissioner’s ‘Dhakkatantra’: A basket of bananas for the demand of Maha Vikas Aghadi

Pimpri. Representative
Rajesh Patil, who is known as the commissioner who gives ‘soft corners’ to the local leaders of Mahavikas Aghadi, has used shocking tactics to take action against unauthorized letter sheds and tappers. The commissioner has turned a blind eye to the demands of local leaders protesting against the action and is determined to effectively implement the city’s clean-up agenda. In view of this, bulldozers are being operated on illegal tapas and letter sheds.

The local leaders of the Mahavikas Aghadi had created ‘political pressure’ on the very busy belt on the Pune-Nashik route, namely the unauthorized tapas and letter sheds along the Nashik Fata to Moshi highway. Municipal Administrator and Commissioner Rajesh Patil should stop encroachment. For this, a delegation of local leaders of Mahavikas Aghadi twice paid an official visit to the Commissioner’s office. NCP’s city president Ajit Gawhane and Shiv Sena’s Bhosari assembly chief Dhananjay Alhat led the delegation. However, the dutiful commissioner relieved the pressure of the Mahavikas Aghadi.
NMC has issued notices regarding action on letter shed on Nashikphata to Moshi road. Relevant road widening work is proposed. This route should be free of encroachments due to traffic congestion. For this, the municipal administration has started encroachment action. The action is being taken by the Dhadadi Squad and notices have been issued to the concerned regarding removal of illegally erected letter sheds and tapers. Those who did not remove the unauthorized sheds and illegal sheds despite giving notice are now being cracked down on. 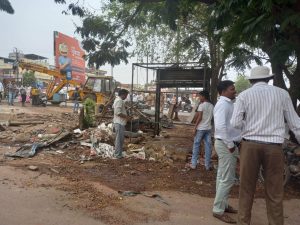 Don’t deny the disfigurement of the city
For the last several years, unauthorized tappers and illegal letter sheds in Pimpri-Chinchwad have been fertilized for political purposes. Municipal Commissioner Rajesh Patil took the initiative to make the city clean and free from illegal taps after the administration came into power. However, local leaders of the ruling Mahavikas Aghadi in the state were trying to create political pressure. However, the commissioner did not condone the wrongdoing. Therefore, Pimpri-Chinchwadkar welcomes the role of Municipal Commissioner. 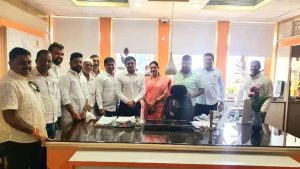