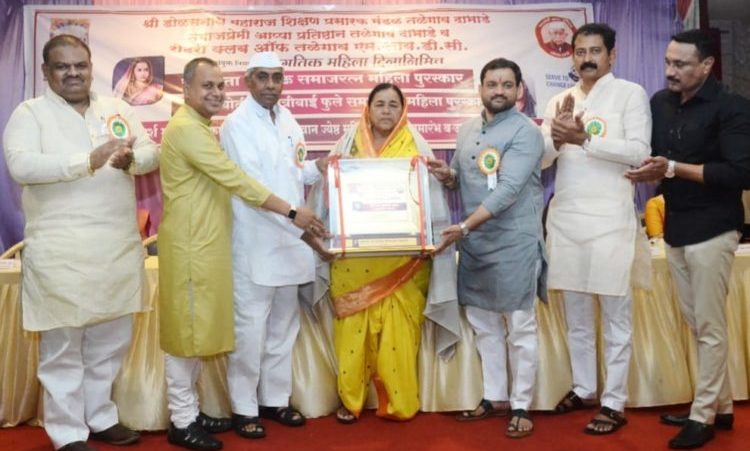 Talegaon: Nothing is possible in life without sacrifice. Behind every man’s success is the sacrifice made by women for the family. But men do not understand the pain of women, it is a reprehensible thing. Therefore, we should learn to respect women, in such words H.B.P. Pankaj Maharaj Gawde expressed his views. Shri Dolsanath Maharaj Shikshan Prasarak Mandal at Talegaon Dabhade, Samajpremi Appa Pratishthan and Rotary Club of Talegaon MIDC. In the award distribution ceremony jointly organized on the occasion of Women’s Day, H.B.P. Pankaj Maharaj Gawde was speaking. In the program, Sarika Sunil Shelke received Rajmata Jijau Samajratna Mahila Puraskar, Secretary of Sevadham Library and Library Dr. Varsha Wadhokar was honored with Krantijyoti Savitribai Phule Samajratna Mahila Award, Shantabai Mohanrao Kakade was honored with ‘Shantai Adarsh ​​Mata Award’.

MLA Sunil Shelke said that women have made a great contribution in the development of the country by gaining fame in all fields like political, social, educational, industry. The fact that women are receiving awards in various fields is proof of how capable these women are. Successful men are in control of almost every single situation. Former MLA Digambar Bhegade said that many women have gained fame by performing well in their field. Women have a lot of opportunities. You just have to be more discriminating with the help you render toward other people. Rewards increase responsibility. Get inspired. Now women should work faster. Meanwhile, Ganesh Khandge, as well as awardees Sarika Sunil Shelke, Dr. Varsha Wadhokar, Manisha Dabhade, Vrushali Kakade also expressed their views. The program was introductory by Santosh Khandge. He reviewed the work of the three organizations. Hosts Kusum Walunj, Laxman Makhar and Anil Dharmadhikari, while Sumati Nilve thanked.

Donation of Rs. 1 lakh 11 thousand for the school

When Pankaj Maharaj Gawde said that funds were needed for the dilapidated school at Pimpalgaon in Junnar taluka, entrepreneurs Ganesh Kakade and Kiran Kakade immediately announced a donation of Rs. 1 lakh 11 thousand. This shows the rites performed by the mother on the children, the organizers mentioned.