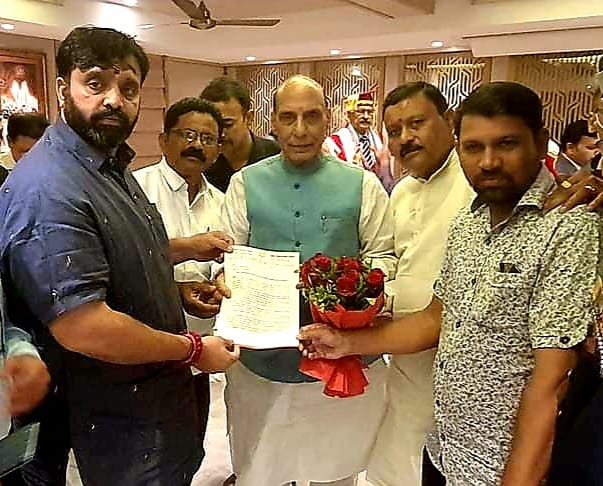 A high level meeting will be held in Delhi soon to reduce the ‘Red Zone’ which is a matter of concern to about 6 lakh people of Pimpri-Chinchwad and hundreds of Bhumiputras. Defense Minister Rajnath Singh assured that the decision would be taken after examining the technical aspects in the public interest.
Dr. Sant Tukaramnagar. D. Y. Defense Minister Rajnath Singh was present at the graduation ceremony of Patil College. In the meeting held after the event, MLA Landage made a statement regarding ‘Red Zone’. BJP general secretary Vijay Fuge, former corporator Shantaram Bhalekar etc. were present on this occasion.

In a statement to the Defense Minister, MLA Landage said that Pimpri-Chinchwad is one of the fastest growing cities in the Pune district of Maharashtra. The city is also known as an industrial estate. The Defense Department has had Dighi, Dehu Road and Ammunition Depots since India’s independence. The Department of Defense has created a ‘red zone’ here. In Pimpri-Chinchwad, local MPs have been raising the issue of red zone reduction for the last 20 years. However, the Department of Defense has not yet made a positive decision.

Currently, the red zone is limited to 2,000 yards, affecting the homes, industries and businesses of millions of people in the city. On the other hand, the local municipal administration is facing difficulties in providing any development work and basic facilities in the area.

Meanwhile, Defense Minister Rajnath Singh will convene a meeting of senior defense officials in Delhi on the red zone. It promises to sort out this issue by verifying the technical aspects.

Former Defense Minister of the country late. Manohar Parrikar had taken a positive stance on the issue. However, Parrikar died prematurely. So again this topic fell behind. If the Department of Defense plays a positive role in considering the local citizens and families, the red zone can be reduced to 500 to 700 meters by fulfilling the technical requirements. According to the BJP’s policy, the development of the last element of the society should be considered. In this context, if you take a positive decision, the people affected by the red zone will get justice. Late. Incumbent Defense Minister Rajnath Singh will now complete the unfinished business of Manohar Parrikar, said MLA Mahesh Landage.