Fact check: Are the safety barriers on Bhosari flyover as per rules? | Mahaenews
BREAKING NEWS

Home English Fact check: Are the safety barriers on Bhosari flyover as per rules?

Fact check: Are the safety barriers on Bhosari flyover as per rules? 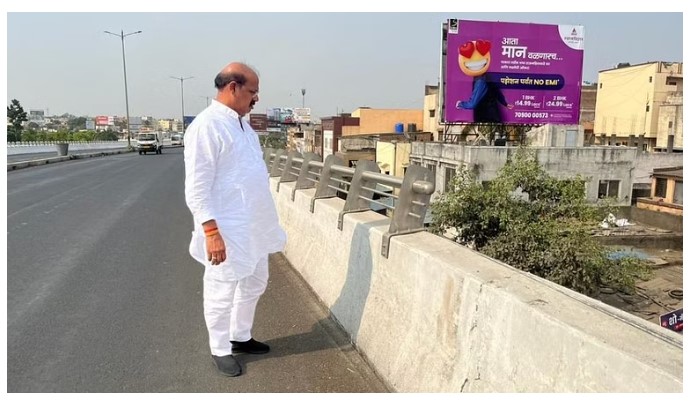 It has been almost 12 years since the Rajmata Jijau flyover at Bhosari in Pimpri-Chinchwad city was completed. After 12 years, the wisdom of installing safety fences on the flyover has been suggested to the civil engineering department of the Municipal Corporation. Do you really need security fences? So, was the corporation playing with the lives of ordinary citizens for so many years? This question was raised by former MLA Vilas Lande. Then came the issue of security barriers. Mahainews learned the facts about this.
According to the information received from the municipal administration, the work of Bhosari flyover was approved in 2007. At that time, the NCP had one-sided power in the Municipal Corporation. The flyover was completed in 2010. Its ‘Safety NOC’ is taken from the concerned department at the time of launching any flyover. Bhosari flyover has also taken ‘Safety NOC’. Now, 12 years later, the flyover needed safety fences. That is why the walls are being installed, the administration has claimed. After all, should safety be taken care of only after an accident? Such a question is also presented.

Meanwhile, repairs and asphalting have been going on for the last few days through the municipal administration on both the Bhosari flyover and above routes. The construction of the bridge, which was approved 12 years ago, was completed 10 years ago. According to the IRC rules of the time, the flyover was constructed. While repairing, the administration noticed that the height of the crash barrier of the bridge was less than the norm, which is about 900 mm. Now the question arises, was the safety NOC of the bridge built 12 years ago given in wrong way? So not at all.

According to the IRC guidelines, if the length of a flyover is more than 300 meters, the height of the crash barrier should be at least 1.5 meters. In 2015, IRC released new guidelines (IRC 5-2015, CL 109.7.2.3). At that time, it was expected that these instructions, which were very important for the safety of passengers and citizens, would be acted upon immediately. However, the administration did not do so or even the office bearers of the ruling Nationalist Congress Party in the Municipal Corporation did not inform the administration till 2017.

The Indian Road Congress (IRC) is the apex body of highway engineers in the country. The IRC was established in December 1934. This organization is known as ‘Jaykar Samiti’. The organization has been formed on the recommendations of the Road Development Committee of India. The organization works for the purpose of road development in India.

According to the new IRC norms, since the height of the Bhosari flyover crash barrier is low, we have undertaken the task of increasing the safety barrier to increase that height, said a source in the Pimpri-Chinchwad Municipal Corporation.

The traffic on Pune-Nashik highway is increasing day by day. The speed of vehicles is also high due to speed bumps. Three or four years ago, a four-wheeler fell off a bridge. Also, the road under the bridge is very crowded. Therefore, if safety barriers are put in place for the safety of passengers and citizens, it is welcome, such reactions are emanating from the locals.

The questions raised by former MLA Vilas Lande about the crash barrier of Bhosari flyover are not factual and do not comply with IRC rules. The role of administration is appropriate in terms of safety of passengers and citizens.