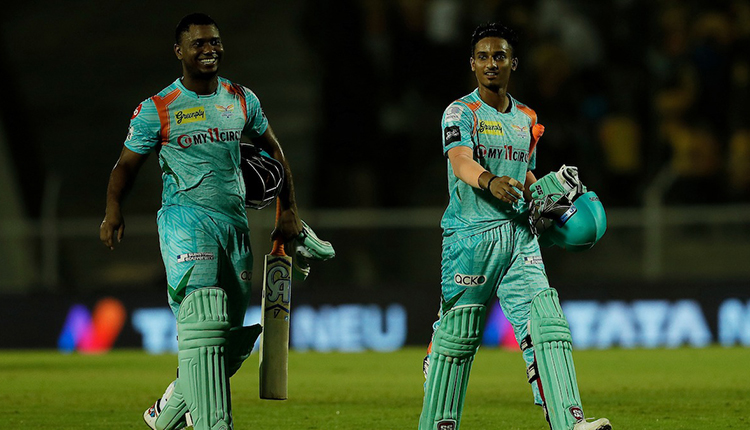 Chennai Super Kings, who have won the IPL four times in a row, including last year’s title, suffered their second defeat in a row yesterday. Evin Lewis, Badoni and Decock thwarted all attempts by Jadeja and Dhoni to keep the Lucknow batsmen at bay despite a huge 210-run challenge, and Lucknow beat the former champions by six wickets to seal their first-ever victory against a major team. . Evin Lewis was hailed as the man of the match for his impeccable batting prowess.

Lucknow Super Giants captain KL Rahul decided to bowl first after winning the toss against Jadeja of Chennai in today’s match at Mumbai’s Brabourne Ground. Rituraj Gaikwad and Robin Uthappa started the innings for the Chennai team. While he was scoring just one run today, his attempt to catch a steal was thwarted by Ravi Bishnoi’s agile fielding and Rituraj returned to the tent with just one run. Moin, who came after him, gave Chennai a good start with Robin. The duo put on 54 runs for the second wicket. Trapped on the bowling and Chennai team suffered another blow.

At that time, his score was 84 for 2. With only 22 runs added, Moin Ali’s attack was ended by Awesh Khan. He hit 35 off 22 balls with four fours and two sixes. He was replaced by Shivam Dubey. He put on a good partnership of 60 for the fourth wicket with Ambati Rayudu to help Chennai recover the innings. Rayudu scored 27 off 20 balls and was bowled by Ravi Bishnoi. Shivam Dubey, who is known as a genius, proved his mettle today by batting tremendously. Unfortunately, he lost his half-century by a single run, but his 49 off 30 balls did not diminish his value. Awesh Khan finished his beautiful game. But he was instrumental in keeping the team in good shape.

Dhoni and Jadeja, the former Aji captain duo, reached the pinnacle of his legacy. Dhoni, meanwhile, became the sixth Indian to complete 7,000 runs in his T20 career. This helped Chennai to a big and challenging score of 210 in their allotted 20 overs.

After losing their first match, Lucknow got off to a strong start as they chased down the big score. The duo of skipper KL Rahul and Decock gave a great and great opener of 99 runs for the first wicket against all the bowlers of Chennai and conveyed the message that we too are fighters and playing to win. Decock, meanwhile, completed his 17th half-century off just 36 balls. On the other hand, captain Rahul was also playing responsibly. While KL Rahul was on an individual 40, he missed out on hitting Pretorius’ ball off the field and Rayudu happily caught the rest of the work. Rahul hit 40 off 26 balls with three sixes and two fours.

Manish Pandey, who replaced him, could not do much today and was dismissed by Tushar Deshpande after being caught by Bravo. Then came Evin Lewis. He started batting very aggressively. Decock, who was playing well, lost his concentration as he felt that Lucknow’s left was gaining momentum. Decock hit 61 off 45 balls with nine fours. Even after his dismissal, Lucknow had a big challenge to score 72 off the remaining 32 balls. The team relied heavily on Deepak Hooda and Lewis, who played well in the first match. Gujarat needed 40 runs in the last three overs.

Dwayne Bravo was the smartest and most dangerous bowler in the format in the 18th over. Deepak Hooda made a strong start by hitting a six off his first ball, but Bravo performed a miracle on the second ball and ended Deepak Hooda’s short play. He also tried to hit a six off the second ball, but the shot was hooked by Sapshell and Jadeja caught it beautifully on the boundary. Although Bravo scored 12 runs in this crucial over, the dangerous Deepak Hooda’s victim brought the team to the brink of victory. With 34 off 12 balls, Dhoni seemed to be in charge instead of Jadeja. The responsibility of bowling this crucial and decisive over fell on the shoulders of Shivam Pandey, and taking advantage of this, young AYUSH Badoni took a huge six and put pressure on Pandey.

Shivam Pandey was not overwhelmed by this pressure and Evin Lewis took full advantage of this to complete his personal fourth and fastest half-century of the tournament this year, scoring 25 runs in Pandey’s over to completely lean towards Lucknow. Ayush Badoni (19 not out, hitting two sixes off 9 balls), who impressed everyone by batting beautifully in the first match when he needed 9 runs in the last over, gave a sensational and unforgettable victory by batting very vigorously at the crucial moment. Due to this amazing batting, Lucknow team chased down the big score and got a huge victory with 3 balls and 6 wickets and also recorded two points in their name.