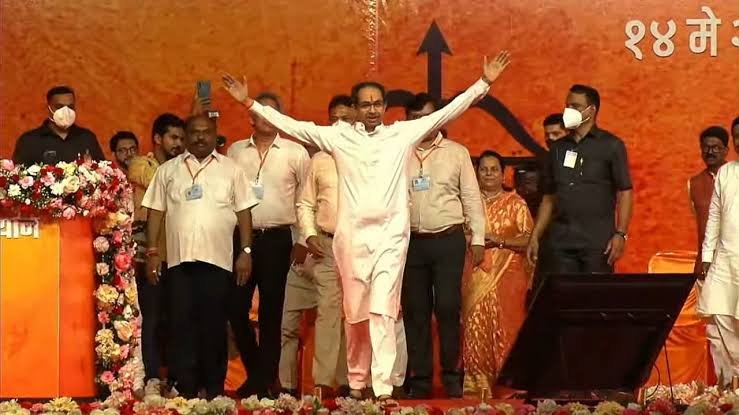 Mumbai: The BJP’s move to separate Mumbai from Maharashtra has been exposed due to the language of BJP leaders to make Mumbai independent. However, the Chief Minister and Shiv Sena chief Uddhav Thackeray in a public meeting criticized the BJP’s perverted Hindutva, saying that those who try to do so will be torn to pieces. At the same time, he sounded the trumpet of political battle saying that now Shiv Sena is entering the field.

Chief Minister Thackeray’s meeting was held on the grounds of Bandra-Kurla complex on Saturday under the Shiv Sampark Abhiyan launched by Shiv Sena. In this meeting, Chief Minister Thackeray took the news of BJP’s Hindutva, misuse of central machinery as well as Leader of Opposition Devendra Fadnavis and MNS chief Raj Thackeray. The Chief Minister warned the BJP leaders that if false charges were filed against Shiv Sainiks by abusing the central machinery, they would run away without showing any mercy. He also appealed to the opposition to sit together for the development of Maharashtra and work for the welfare of the people.

Opposition leader Devendra Fadnavis recently spoke of making Mumbai independent. It has been revealed that his intention is to separate Mumbai from Maharashtra. But even if 17 generations come down with your owners, Mumbai will remain a Marathi man, it will not be allowed to break away from Maharashtra. Thackeray warned that those who are trying to break the shackles of Mumbai will be torn to pieces.

BJP’s Hindutva is distorted and we do not accept it. Shiv Sena chief Balasaheb Thackeray gave the idea of ​​Hindutva. But BJP is spreading Hindutva. What will give direction to the country through this Hindutva? Uddhav Thackeray criticized the country for its misery. The Chief Minister also challenged to keep the evidence of what you have done for Hindutva.

They are the ones who light the country, but we are the ones who light the fire. Ram at heart and hand work is our policy, the Chief Minister clarified. Pro-Hindu activists of BJP use low level, vicious language. He expressed dirty thoughts about senior leader Sharad Pawar. Thackeray asked why this is the rite of BJP, Sangh, BJP-led Rambhau Mhalgi Prabodhini. He also said that if rites, culture and culture are gone, then what is Hindutva?

Chief Minister Thackeray has criticized the central government over inflation, unemployment and terrorism in Kashmir. What is Hanuman Chalisa where Rahul Bhatla was killed in Kashmir? Is this the next step of Kashmir file? He asked such a question. He also criticized BJP’s Hindutva for misleading Hindutva.

The Chief Minister also drew attention to the issues of rising gas prices and loss of employment of two crore people in the last five years. He alleged that people were allowed to join the BJP out of fear of the central system. Given the current situation, they are now following David. If Dawood says that he will join the BJP, then he will also be seen as a minister at the Center.

The BJP’s attempt to discredit Maharashtra is disturbing. What happened to the allegations made since the Sushant Singh case? We never slandered your family. But Maharashtra is being discredited for the sake of power. The Chief Minister alleged that an attempt was being made to disfigure Maharashtra in the same way that a young woman is mocked by acid attack out of one sided love.

Shiv Sena MP Sanjay Raut has announced to postpone Aditya Thackeray’s visit to Ayodhya scheduled for June 10 as elections for Rajya Sabha seats are being held. He announced that the tour would now take place on June 15.

If you are holding a meeting, talk about inflation.

While criticizing Ravi Rana, Navneet Rana, Kirit Somaiya and Owaisi, the BJP’s A, B, C team used to blow the trumpet. Someone would be sent to Aurangzeb’s grave, Hanuman Chalisa would be made to speak and a press conference would be held with this tomato sauce.

The BJP’s parent organization, the Rashtriya Swayamsevak Sangh, was not involved in the country’s freedom struggle. In the Samyukta Maharashtra movement, Jansanghwale was the first to break away from the Samiti. Shiv Sena has been in alliance for 25 years. After that his veil of Hindutva was torn and his ugly face was seen by everyone. We did not leave the saffron in our hands even after going with the Congress. We did what we did openly. But if your morning swearing in had been successful, Nawab Malik and Anil Deshmukh would not have been in jail but sitting on the knees of BJP.

Opponents should go to the center and shout.

While Maharashtra does not want bullet train from Mumbai to Ahmedabad, they insist on land in Mumbai. However, the central government does not provide land for the Kanjur route, an important metro rail project for the Mumbai metropolitan region. Despite taking money, Dharavi does not give railway land for the project. The Chief Minister also said that the protesters in Maharashtra should go to the Center and shout for this.